The available MCBS data prior 2015 is not optimal for data analysis. No data exists for 2014 because the questionnaires were not administered. However, a new baseline panel was still selected.

Below shows an image that explains the timeline for a typical year compared to that of 2015. 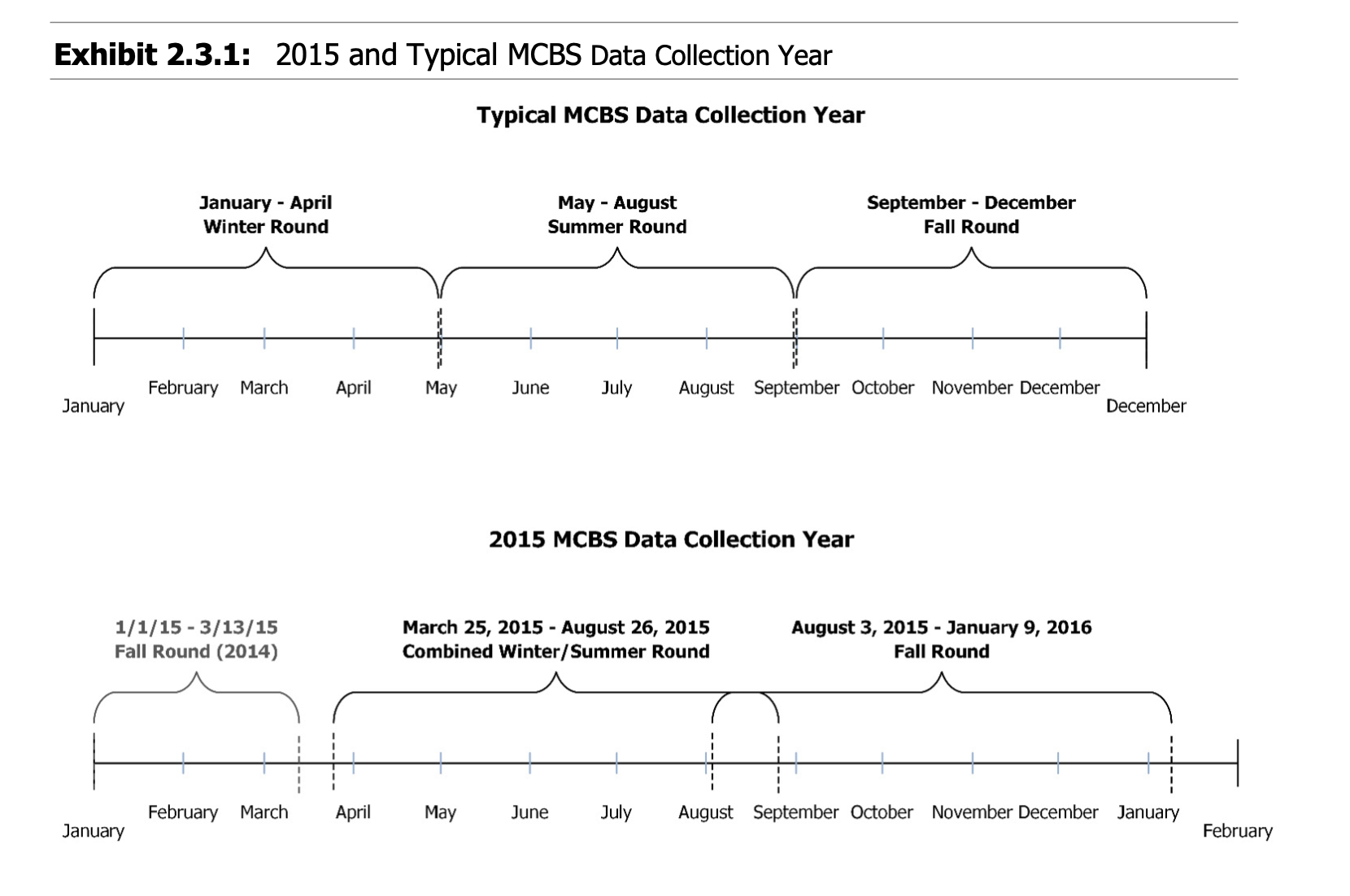 The survey files contain information regarding various aspects of the beneficiaries’ lives, including topics such as their housing, demographic information, income, and health status. Prior to 2015, these files were labeled “RIC-X” for the various topics, but now they are labeled with titles that reflect their contents, e.g. “Health Status and Functioning (HFQ)”. The questions about nicotine and alcohol are included within the nicoalco.csv file under the Survey folder (/n/dominici_nsaph_l3/data/mcbs/2015/survey_file/data/csv/nicoalco.csv within FASSE). In order to match these patients with their demographic information, use the demo.csv file with variable BASEID.

In order to learn what each variable represents in these files, please reference the Codebooks folder. For example, to access the code book for the nicotine and alcohol survey, you can navigate to /n/dominici_nsaph_l3/data/mcbs/2015/survey_file/codebooks/nicoalco_2015.txt in FASSE to get the codebook. Some variables include the number of drinks per day, if the beneficiary currently smokes, if they ever smoked, etc. The demographic file codebook contains information such as DOB, sex, race, income, state, county, and zipcode.

To access MCBS data, please open FASSE and navigate to /n/dominici_nsaph_l3/data/mcbs/2015/. Below, you can see a data tree reflecting the folder structure of the 2015 folder:

Above we can see the overall setup of the directories. Most of the files that will likely be used in data analysis are in `/survey_file/data/csv’, and these data files are also stored in the SAS .sas7bdat format within the sas folder. The codebooks folder provides information for each variable included in the code, along with the survey logic (e.g. any skip patterns used in the survey), and what the different values signify in the data (the variable used for missing data, any data binning, etc.). The documentation folder contains more detailed information about how the data was collected and describes the contents of each survey at a high level.

Much of the data of interest will be in the survey_file/data/csv/ folder. Below we can see the files in this folder:

Since the nicotine and alcohol survey is of particular interest, below is a data dictionary with several variable names of potential interest and a corresponding description. To access this file, please navigate to /n/dominici_nsaph_l3/data/mcbs/2015/survey_file/data/csv/nicoalco.csv. The dictionary below is based upon the codebook for nicotine and alcohol; for additional variables and their information, please reference the codebook located in /n/dominici_nsaph_l3/data/mcbs/2015/survey_file/codebooks/nicoalco_2015.txt.

Please note that some of the variables have a high number of inapplicable values denoted ., included SMOKNOW, DIDSMOKE, and DRINKSPD because of their inclusion criteria; you needed to denote that you previously drank/smoked to be included in the question. You can write a script to fill in 0 as a value for some of the inapplicable beneficiaries. For example, you can fill in the number of drinks per day as 0 for people who drink 0 days per month with something similar to the following R script:

MCBS in 2016 is similar to that of 2015. The files are organized in the same way as those in 2015 (please reference the data tree above). However, some of the files included in the survey are different. Please reference the list below to see the different file names. Note that in 2016, there are longitudinal weights for 1 and 3 years prior (lng2wgts.csv and lng4wgts.csv, respectively), but not for 2 years as there were no surveys in 2014.